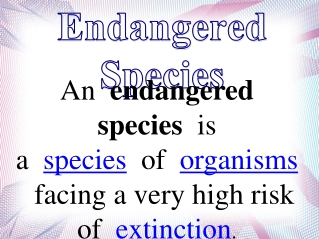 Northern Territory - . bilby red kangaroo wedge-tailed eagle. bilby. bilbies are a marsupial and are the biggest of the

Endangered Species - . an  endangered species   is a  species   of  organisms   facing a very high risk of An Introduction to Mountains - . “any part of a land mass which projects conspicuously above its surroundings”

The Six Faunal Regions - . nearctic (us) palearctic more species than nearctic because larger neotropical (most species)