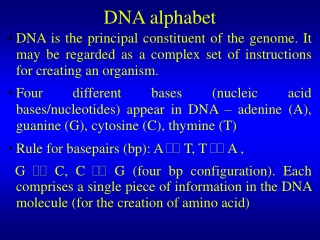 DNA is the principal constituent of the genome. It may be regarded as a complex set of instructions for creating an organism. Four different bases (nucleic acid bases/nucleotides) appear in DNA – adenine (A), guanine (G), cytosine (C), thymine (T) Rule for basepairs (bp): A  T, T  A ,

DNA: The Alphabet of Life - . dna. deoxyribonucleic acid. stores and passes on genetic information from one generation to

alphabet - . new deal: alphabet agencies. part of fdr’s new deal ……agencies created by the us govt. to bring about

ALPHABET - . АНГЛИЙСКИЙ АЛФАВИТ. a a. a is for apples and apple-trees you can see apples on apple-trees.