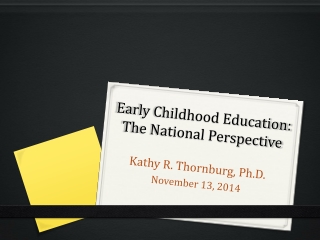 Early Childhood Education: The National Perspective. Kathy R. Thornburg, Ph.D. November 13, 2014. From the months of. A Sad Story A shopping cart was my first crib. My sister and me. Our home was on the street. Finally under a roof. Two beds for six.

EXPANSION - . usi.8a describe territorial expansion and how it affected the political map of the united states, with

Transition: Preschool - What is transition?. transition is defined as a coordinated set of activities for a student with

Expansion - . jeopardy. choose a category. you will be given the answer. you must give the correct question. click to

Preschool Parodies - . directions:. you will need a partner together you will create two (2) songs from scratch pick a

Spondeo Preschool - In chandler for your children, then you can believe at spondeo preschool.we teach your children by

Expansion - . how did american expansion reflect the development of an american identity and american nationalism ? .

Preschool Teachers - . interviews with four teachers within the same discourse. interviewed by jen whitt may 2012.