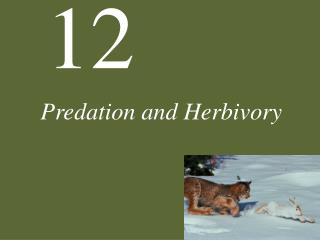 HERBIVORY - . herbivory. herbivory (a broad definition): the consumption of all or parts of living plants seed

Community Ecology Chapter 21 - . i. species interactions. review: a population is a group of individuals of the same

An organisms role in its environment… - 12a interpret relationships (predation, parasitism, commensalism, mutualism,

Ch 12 Reproduction,Development - . and growth. organisms are not immortal. they die due to aging , predation , diseases ,

PREDATION - . readings: freeman chapter 53 students who wish to observe their religious holidays in lieu of attending