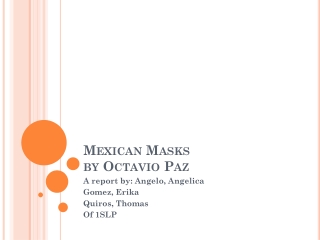 Octavio Paz - . labyrinth of solitude lecture one. the back of the book. literature, history (mexico) “the labyrinth of

Octavio Paz - . by: chris muldoon and matt diflorio. childhood. octavio paz was born in mexico city in on march 31 st ,

Mexican Drink By Casamezcal - Recognition and awards are significant fro nay trade. they are more than only pride. they

MASKS - S. s. m. a. k. masks. masks are a universal cultural link being found in most nations all over the world. they

Masks: - . masks:. must cover only ½ of face , from hairline to bottom of nose and must fit your face must have a means

masks - . one of the earliest examples still around: the mask of agamemnon. mask: covering to hide or guard the face.