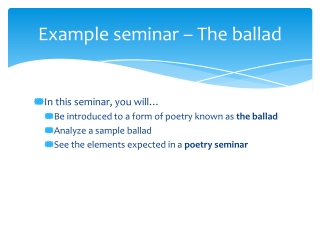 Example seminar – The ballad. In this seminar, you will… Be introduced to a form of poetry known as the ballad Analyze a sample ballad See the elements expected in a poetry seminar. What is a ballad?. We tend to think of ballads as dramatic love songs fit for the divas of pop music.