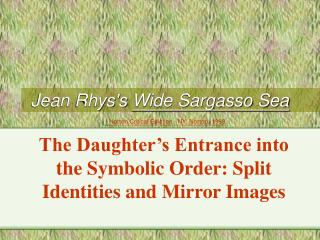 JEAN WATSON’S - . t heory of human caring. jean watson’s motto . “we are light in institutional darkness, and in

Jean-Jacques Rousseau - . the discourse on the origin and foundations of inequality among men. jean-jacques rousseau.

Jean Rhys - . rhys is born and raised in roseau, dominica, in the west indies. she travels a lot. ford madox ford thinks

Wide Sargasso Sea as a Post-Colonial Novel - . a presentation by: tan ho yee evelyn yap achmad firdaus. the basics. what

The Madwoman in the Attic - . and other media tropes. the idea. usually someone with a mental or severe physical