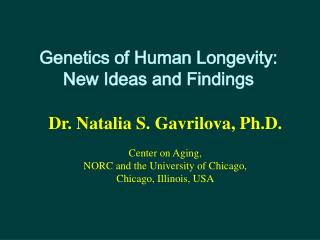 Biodemography of Mortality and Longevity - . leonid gavrilov natalia gavrilova center on aging norc and the university of

Why do we age so differently? - Genetic and molecular determinants of human ageing and longevity - dna repair, pro- and

Genetics and Prenatal Development - . the beginning of life conception. the human cell. the human body is comprised of

Concept 10.1 - . genetics developed from curiosity about inheritance. austrian monk who developed two laws of heredity in