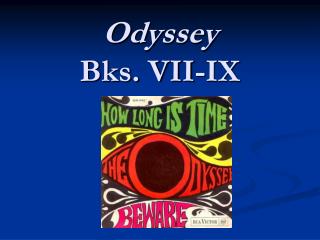 Odyssey Bks. VII-IX. WHERE WE LEFT OFF. Odysseus has left Kalypso, and been shipwrecked by Poseidon on the island of Phaiakia – Nausikaa Telemakhos is happily staying with Menelaos and Helen in Sparta Penelope is still holding off the suitors, but barely

Odyssey Bks. VII-IX - . where we left off. odysseus has left kalypso, and been shipwrecked by poseidon on the island of

The Odyssey Bks. 13-14 - . xenia lies and deception xenophobia the importance of the sea tie-ins with 5 th

Odyssey Books IX-XII - . using the text draw your interpretation of the assigned island/people. be detailed and colorful.

BKS AMBASSADORS - . steve brogan steve has a wealth of racing experience across a breadth of classes &amp; is a

BKS 24X7 - . metadata renovation. the “fixer-upper”: vendor-created records. how do you fit hexagonal, square, and

Odyssey - . homer and the odyssey. following are some notes on homer and what scholars call the “homeric question,”

Odyssey - . some background. composed circa 600-800 bc by homer odyssey is an epic poem a written version of the classic

Odyssey  - . by kaylyn taylor. new school :/. my biggest journey i have been through is moving to a new school. from

Odyssey Standalone vs. ILLiad/Odyssey - . what is the difference? tony melvyn oclc. osu experiences dramatic increase in