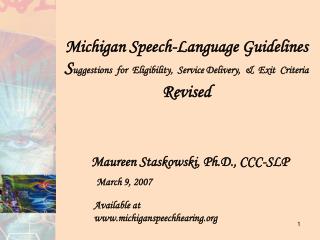 Criteria for Choosing Speech Topics - . choose a topic early choose a subject you know something about and can find out

Speech Guidelines - . environmental issues. what not to do…. what could this student have done to improve the delivery

Advance Budget Numbers: Revised Criteria for Eligibility - . presented by: osp june 13, 2013. what is an advance budget?.

Speech Delivery - The importance of delivery. speech delivery. what makes a good speech?. speak clearly. enunciate so the

Revised Strategy Criteria for 2013 - . applications will be compared on their support for comprehensive neighborhood