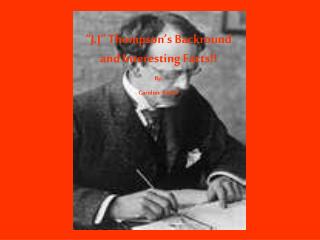 “J.J” Thompson’s Backround and Interesting Facts!! By: Caroline Ratliff. Sir Joseph John “J.J.” Thompson was born on December 18 th (MY BIRTHDAY!!!), in 1856. He was born in Cheetham Hill, Manchester in England. In 1870 he studied Engineering at the University of Manchester.

“I Am Sorry But We Have to Let You Go” - . what to do when you are laid off. layoffs generally. management generally

How experiments can be visionary - . karel williams centre for research in socio-cultural change (cresc) university of

Experiments on Concentration Camp Prisoners - . by: taylor marvel. thesis statement. why the nazi’s experimented on

Preliminary Land use experiments - . potential vegetation. jules vegetation spun up under 1958-1970 climate and