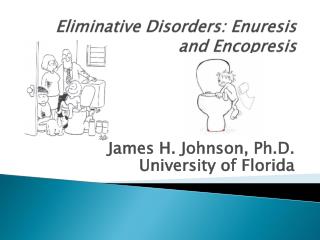 Eliminative Disorders: Enuresis and Encopresis. James H. Johnson, Ph.D. University of Florida. Enuresis. Children are considered as enuretic if they; fail to develop control over urination by an age at which it is usually acquired by most children or

Self-Esteem, Stigmatization and Coping Strategies among Children with Nocturnal Enuresis - Introduction. for a child to