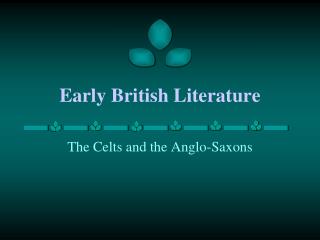 Early British Literature. The Celts and the Anglo-Saxons. Celtic Literature. Irish Literature. Ireland has the oldest vernacular tradition of literature in Europe with written texts dating from the 6 th c. Old Irish : before 900 Middle Irish : 900-1350