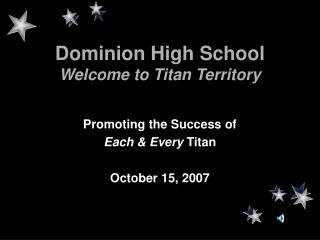 Dominion - Session 2 rise up. dominion. dominion: from the

In Kenya, the majority of girls do not go to high school - . in nanyuki, they want to change this trend by building a new

Wondering what to do after high school? - . the a rmed s ervices v ocational a ptitude b attery or asvab can help. who: RE-THINKING HIGH SCHOOL - . should catholic high schools be different?. this or….?. …this?. think: . do we need a