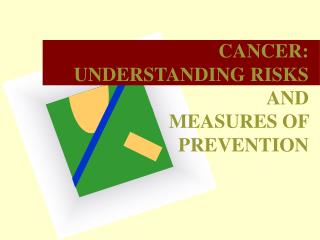 CANCER: UNDERSTANDING RISKS AND MEASURES OF PREVENTION. INTRODUCTION. About 2 out of every 5 Americans will develop some type of cancer during their lifetime; about 1 in 5 will die from cancer (40% and 20%, respectively) Most cancers are preventable

Diet and cancer prevention - . extension. learning objectives. to understand how cancer develops. to know about the

Cancer Prevention in Egypt : What can be done in low income countries - . by:. hussein m. khaled prof. of medical