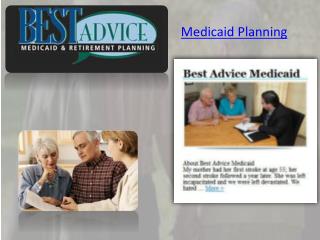 http://medicaidplanning.bestadvicemedicaid.com//nFlorida Medicaid Planning, Medicaid Planning in Florida, Medicaid Eligibility/nMy mother had her first stroke at age 55; her second stroke followed a year later. She was left incapacitated and we were left devastated. We hated the thought of placing her in a long-term care facility but we had no choice. How were we going to pay for her care and still preserve the assets she wanted to leave to her children and grandchildren? Luckily, I had experience in Medicaid Planning from my years of working with the State of Florida/n Who Should Consider Medicaid Planning? - . determining eligibility or excess spend down. summary of what we covered last

MEDICAID, MEDICAID, WHERE ART THOU MEDICAID??? - . funded in part by cms medicaid infrastructure grant cfda 93768. an

Medicaid - . what is medicaid? many people believe that medicaid will pay for their care in the community or in

Medicaid: - . finding a way through the maze of non iv-e eligibility .