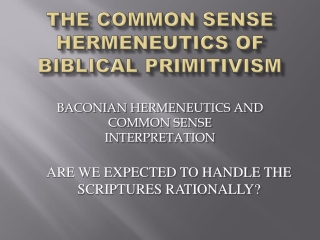 Biblical Hermeneutics - Biblical backgrounds. biblical hermeneutics. all scripture is god-breathed and is useful for

Hermeneutics: The Art and Science of Biblical Interpretation - Comunicación y gerencia. hermeneutics: the art and

Common Sense - . by thomas paine. historical context. about the author:. born on january 29, 1737 in england to an

Common Sense - . rule of law (sect. 5) “let a day be solemnly set apart for proclaiming the charter; let it be

COMMON SENSE - . one of the most important factors in convincing many americans that complete independence was to only

Common Sense - . this was a pamphlet written by thomas paine. he suggested that the people should make the laws . he also