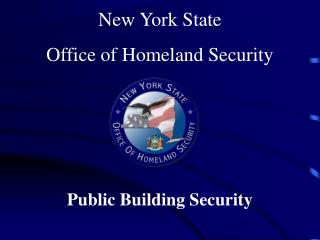 New York State Office of Homeland Security. Public Building Security. Questions I Want You to Ask Yourself Today…. Why Would I Be A Target? How Would They Attack Me? What Can I Do To Deter The Bad Guys?. Definitions of Terrorism. Department of Defense

Landscapes of New York State - . atlantic coastal plain: fire island is a barrier island on the south side of long