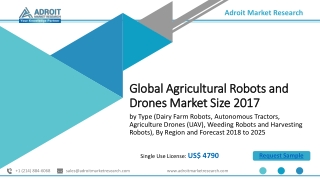 The global agricultural robots and drones market size is projected to be worth USD 56.02 billion by 2025 driven by increasing demand for smart technology paired with surge in government spending in agriculture sector.

Global Logistics Robots Market Research Report and Forecast 2020-2025 - According to the recent report by imarc group,