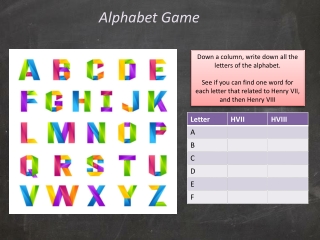 Alphabet Game. Down a column, write down all the letters of the alphabet. See if you can find one word for each letter that related to Henry VII, and then Henry VIII. FLIPPED LEARNING. The work due in for today is:. TASK:

alphabet - . new deal: alphabet agencies. part of fdr’s new deal ……agencies created by the us govt. to bring about

ALPHABET - . АНГЛИЙСКИЙ АЛФАВИТ. a a. a is for apples and apple-trees you can see apples on apple-trees.