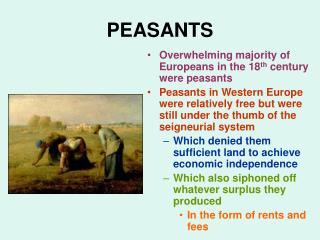 PEASANTS. Overwhelming majority of Europeans in the 18 th century were peasants Peasants in Western Europe were relatively free but were still under the thumb of the seigneurial system Which denied them sufficient land to achieve economic independence

THE SOCIAL ORDER OF THE 18 TH CENTURY - . social status not determined by wealth/economics -&gt; based on traditional

The Medieval Peasant - . this presentation covers: peasant homes and work controlling the peasants women. 1 of 16.

Where were the Japanese peasants likely to die in the 17 th -19 th centuries ? - . hiroshi kawaguchi faculty of business

Medieval Life - . what was life like for the people of england in medieval

King Peasants Barons and Bishops Knights Gives land Works for the Lord of the Manor - Starter : try and remember your

Life in a Village/ Life in a Town - . by michael ledford. peasants spent many long hours farming and trading but the

Life On a Medieval Manor - . villages on a manor usually had less than 600 residents. they produced everything they

Feudalism - . in one sentence, answer the following question: what is the difference between feudalism and manorialism ?.

The Peasant Revolts - . rebellion. what is a rebellion or revolt? a fight against the government or leaders by those of a

Manorialism - . emma mcgirl , lily gold-parker. the manor: an economic system. the manor was the lord’s estate one or

The Caging of the Peasantry - . peasants at work. questions. what does wickham mean by the &quot;caging&quot; of