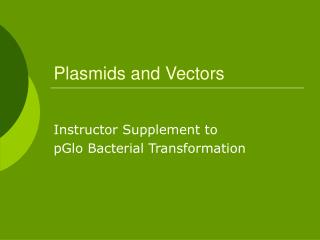 Plasmids - . plasmids . a plasmid is a small dna molecule within a cell that is physically separated from

Recombinant Plasmids - . what is a plasmid?. a plasmid is a circular dna molecule separate from the much larger

What are Plasmids? - . plasmids are circular pieces of bacterial dna that often contain genes not related to basic life

Plasmids, primers (and beyond!) - . or how to make green

Ch. 5A: Transforming Bacteria with Recombinant Plasmids - . describe the role of transformation in the gene cloning