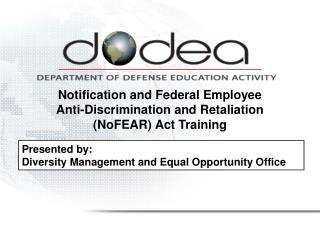 Notification and Federal Employee Anti-Discrimination and Retaliation (NoFEAR) Act Training. Please carefully review these slides. When you have finished the training, complete the certificate, and notify your supervisor that you have completed the training.

Federal Emergency Decision and Notification Protocol - . this plan deals specifically with the coordination of the

DISCRIMINATION AND PERCEPTION - . partnership. police. pb has partnered with the police to change perception safeguard

Equality and Discrimination - . underlying concepts. dignity (right not to be treated as inferior) economical interests