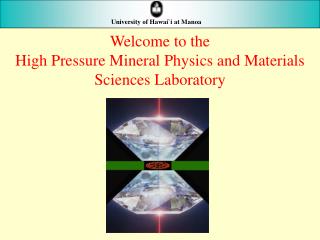 Welcome to the High Pressure Mineral Physics and Materials Sciences Laboratory - . window to the earth’s interior. the

Materials Theory and Mineral Physics - . renata wentzcovitch cems, u of mn. • overview of methods • amorphization of

PHYSICS – Pressure - . learning objectives. what would be more painful?. being trodden on by a 55kg woman wearing

Laboratory Materials and Procedures - . introduction. procedures that take place away from the patient, take place in the