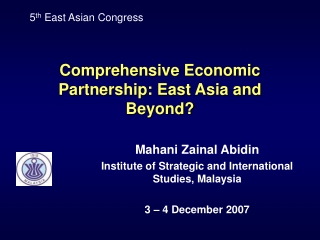 The East Asian Monsoon - Based on “the east asian summer monsoon: an overview” by yihui and chan, meteorology and

Mainland China and the Asian Financial Crisis - . asian financial crisis of 1997. thai currency lost half its value in 6

East Asian Strategy - . used by the four tigers the only development strategy that has successfully moved developing

The Asian Financial Crisis - . 1997. pre-crisis. foreign capital inflows us was in a recession (low interest rates)