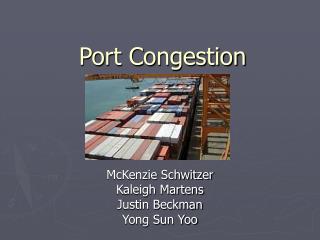 An Introduction To Two – Port Networks - . the university of tennessee electrical and computer engineering knoxville,

Port Information Key to a quality port - . version 8 june 2007. agenda . introduction: why is port information so

CONGESTION CONTROL - . congestion control. when one part of the subnet (e.g. one or more routers in an area) becomes