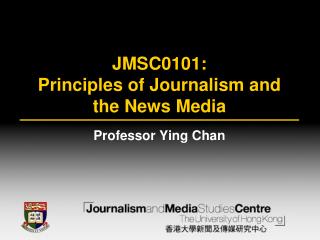 JMSC0101: Principles of Journalism and the News Media

JMSC0101: Principles of Journalism and the News Media . Professor Ying Chan. Chapter One What is News?. Why News?.

JMSC0101: Principles of Journalism and the News Media

What is News? - . getting at the basics.  news determinants. timeliness  — news is perishable. it loses value as it

The History of the American Media - . journalism i – unit 1 mr. dudek. america’s first newspapers. were usually one

What is Media? - . the means of giving masses of people information, ideas or entertainment. forms of media. magazines

The Value of Journalism - . james fallows journalists code of ethics. back of entry. draw a “good” journalist with

News of the World - . casey watts year 1 digital media journalism cats. what is the news of the world?. news of the

The Economics of Digital Journalism: What Happens When Traditional Newspapers Go Out of Business in 2039? - . w. r.