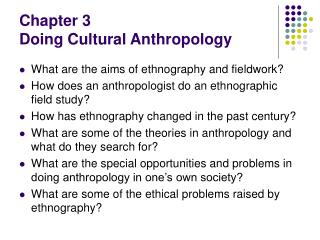 Chapter 3 Doing Cultural Anthropology. What are the aims of ethnography and fieldwork? How does an anthropologist do an ethnographic field study? How has ethnography changed in the past century? What are some of the theories in anthropology and what do they search for?

THEOLOGICAL ANTHROPOLOGY - . coastland university – pastor brett peterson. what is anthropology?. anthropology is the

Chapter 5 - . ancient rome and the rise of christianity. 5.1. the roman world takes shape. objectives:. describe the