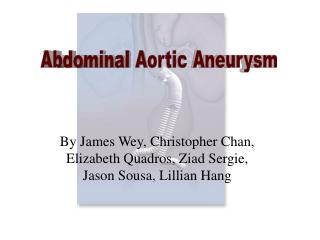 By James Wey, Christopher Chan, Elizabeth Quadros, Ziad Sergie, Jason Sousa, Lillian Hang. In the past 30 years, the incidence of AAA has tripled in the Western world and is the 13th leading cause of death in the US.

Philip and Elizabeth - . the revolt of the netherlands and the spanish armada. the goals:. know philip ii’s

Hang Time - . calibur consulting. karrie pelton is from seattle, washington and will also be graduating in april from byu