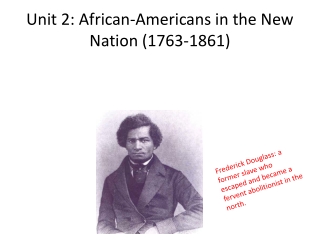 Unit 2: African-Americans in the New Nation (1763-1861). Frederick Douglass: a former slave who escaped and became a fervent abolitionist in the north. Quick Review Questions Chapter 4: African Americans and the Struggle for Independence.

Revolutionary and Post-Revolutionary America - . could america have gained independence from britain in the late-18th

Revolutionary War - . how did maryland help win the revolutionary war? by braden keith and matthew ellena. what is the

Revolutionary Art in Mexico - . dan robartes. muralism. one of the most important forms of art in latin america is

Revolutionary War - . by jonathan. when?. the revolutionary war startedin1775 . it took place in lexington massachusetts.

Blacks and the New Deal - . the ramifications on black society and psychology . class objectives . tsw learn the

REVOLUTIONARY IDEALS - . what we

In Tough Times - `. in tough times. tough times are a blessing because they test the genuineness of our faith in god!. in

Revolutionary Characters - . tuesday, october 04, 2011. warm up . what are the three parts of the declaration of