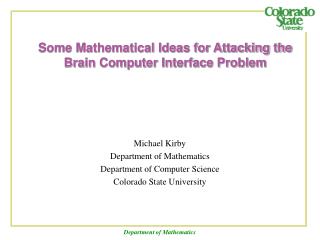 Some Mathematical Ideas for Attacking the Brain Computer Interface Problem

Some Mathematical Ideas for Attacking the Brain Computer Interface Problem

“The Lighter Side of Educational Research” - . chris cannon sandy creek high school. back to school…in style!. 7.2

Anthropology and Social Change - . how technological change impacts human evolution. technology: . an agent of social and