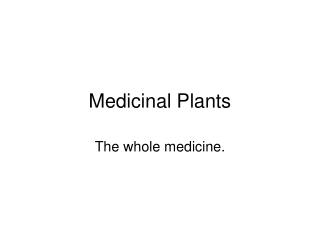 Medicinal Plants. The whole medicine. How many are used?. 75% of the world population depends on traditional herbal medicine In the United state 10% of all prescribed drugs have primary component extract from plant 25% of our common medicine contain some compounds from plants. History.

Antimicrobial Activity of Herbal Plants - . by sanjay singh. http://powerpointpresentationon.blogspot.com. what are