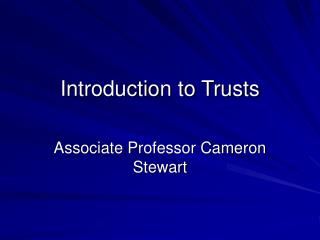 Introduction to Trusts. Associate Professor Cameron Stewart. Defintion. A trust exists when the titleholder of property is obliged to deal with that property for the benefit of another person. Elements. An Introduction to: OBRA ‘93 Special Needs Trusts - . when congress enacted the omnibus reconciliation act of 1993

Trusts &amp; Academies… the fragmentation, marketisation and privatisation of education - . the nut view…. the

The WildCare Trust - . click on one of these buttons to find out more information on the wildcare trust! if you want to

Resulting Trusts - . professor cameron stewart. definition. a resulting trust is a trust that arises because equity

Discretionary Trusts - . basic idea. trustee has discretion regarding: which beneficiaries to pay, and/or how much to

Introduction of Tau Life and Beauty Jan, 2013 “Trust And yoU ” is all we need - . general company information.