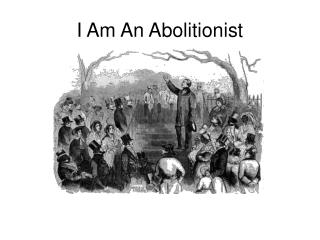 I am an Abolitionist! Oppression's deadly foe; In God's great strength will I resist,

Am I an Entrepreneur? - This introductory module provides questions for you to think about as you explore starting a

I Am an enfp - By: joshua ligon. i am an enfp. e. have high energy think out loud like to be around people a lot are

AM I AN ADVOCATE??? - Case management conference wellness coalition “case managers as advocates” (being an assertive

Was Abraham Lincoln an abolitionist? - . what does the evidence tell us?. abraham lincoln’s great awakening: from

I am an African Lesson - Grade 8 english deped

I Am A Rock, But I Am Not An Island - . lenore pfaff 8 th grade english madill middle school using nature to help

Abolitionist Arguments - . explain the different reasons why people were opposed to the slave trade. describe methods