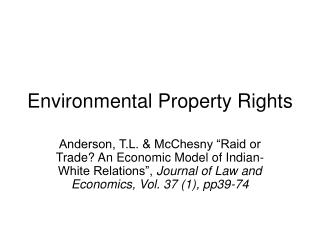 Property Rights - . peter. lee's family. i’ve to work late every saturday night. so, i need to have a good sleep every

Private Property Rights - . the right to use the property exclusively the exclusive right to enjoy income from the

mmons/ Property rights - A safe stock that always sells for $20 in equilibrium. pays $1 per year every year forever ...

Rights in Europe From property rights to environmental democracy in EU law - . presentation at international symposium

Property rights change - . the case of the pastoral maasai in southwest kenya. the problem. why group ranches being

The Economic Approach: Property Rights, Externalities, and Environmental Problems - . chapter 2. introduction. in this