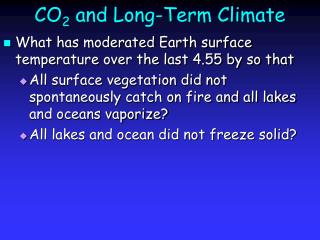 CO 2 and Long-Term Climate. What has moderated Earth surface temperature over the last 4.55 by so that All surface vegetation did not spontaneously catch on fire and all lakes and oceans vaporize? All lakes and ocean did not freeze solid?. Greenhouse Worlds.

CO 2 and Long-Term Climate - . greenhouse worlds: venus and earth. why is venus so much warmer than earth?. mean

Long-Term and Short-Term Changes in Climate - . the earth is 4.54 billion years old in it’s history, there have been

Chapter 12 Long-Term Climate Regulation - . sun about 30% less luminous than today - ts would have been below freezing -

Long Term and Short Term Changes in Climate; The Albedo Effect - . long term climate change. the cause and effects.

Long term causes: number 2 - . political and administrative system. sovereignty. what is it? from what does any political