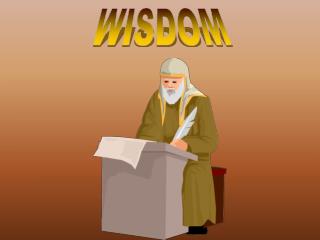 WISDOM. Moral Wisdom or prudence may be defined as the proper connection among the end or goal of an action, the means to achieve it, and the judgment to act upon it, such that the result is a morally satisfying outcome. WISDOM OR PRUDENCE PERFECTS CHARACTER. VISION. MORAL Wisdom Tooth Wisdom - . demystifying the past and planning for the future. ted fields, dds, phd. course outline. part i:

Wisdom - . james 1:5  5 if any of you lack wisdom , let him ask of god, that giveth to all men liberally, and upbraideth

Wisdom walk - . with a piece of tape, attach your symbol to a wall in the classroom where it can be easily seen. get out

Butterfly Wisdom - . “lesson from a butterfly”. one day, a small opening appeared in a cocoon; a man sat and watched

Bible Wisdom - . a game for groups of four players with follow up learning activities. wise words? here are six pieces of

Beyonce Wisdom - . the ever-wise and powerful beyonce knowles once said “ a diva is a f emale version of a hustler.”

Collective Wisdom - . designing surveys for use in assessment. r. ternes , october 2011. defining the problem. the most

Regression Wisdom - . chapter 9. no regression analysis is complete without a display of the residuals to check the