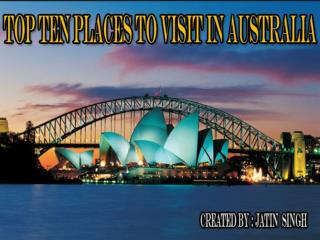 Top 5 Places to Visit in Australia - The only country in the entire world, which also is a continent. australian

Best Places To Visit In Australia - Australia is known for many things like beautiful landscape, beautiful beaches, and

Top Places To Visit In Florence - Florence is one of the most popular tourist destinations in europe. the city has many

Top places to visit in Kerala - Are you looking for kerala tour packages from mumbai ? well, then you are in the right

Top Places To Visit In Cochin - Explore an amazing destination of nature. cochin is a major tourist place of kerala.here

Top Places To Visit In Mumbai - The city mumbai, known as bombay until 1995, is an incredible port city, arranged on the

Top Places to Visit in Udaipur - If you are looking budget hotels in udaipur, hotel panna vilas is one of the luxuries

Top ten Cafes to visit in Toronto - : discover & connect with great local businesses in your local neighborhood like

Top Tourist Places to Visit in Amritsar - If you are planning to visit amritsar, then you've landed at the perfect place.