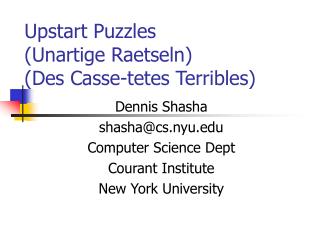 9.3 Number Grid Puzzles - Objective: to reinforce counting, adding, and subtracting with 10s and 1s using the

Puzzles - To. puzzles. algorithms. brian thompson bthom@cs.rutgers.edu. why puzzles?. learning algorithms may be

3D Puzzles - . a puzzle is a set of interlocking pieces that only fit together in one specific way in order to create a

Mathematical Puzzles and Not So Puzzling Mathematics - . c. l. liu national tsing hua university. it all begins with a

Lateral Thinking Puzzles - . elementary goal. the man in the elevator. for a start, here’s one of the oldest and