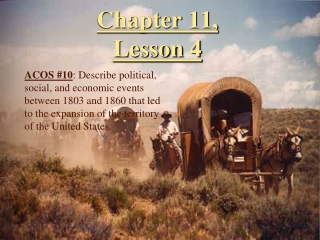 Chapter 11, Lesson 4. ACOS #10 : Describe political, social, and economic events between 1803 and 1860 that led to the expansion of the territory of the United States. Key Vocabulary Words. Wagon train – a line of covered wagons that moved together across the country.

Chapter 11 Lesson 6 - . the skin. click!. function and structure of the skin. the skin has two layers that help to:

Vocabulary Lesson 4 Grade 11 - . acknowledge: (verb) admit, recognize as. sentence : at the end of the trial , the jury

Chapter 8 – Lesson 4 - . the important councils of the church. chapter 8. heresy – a belief or collection of

Chapter 8, Lesson 4 - . being a resilient teen. vocabulary. resiliency – the ability to adapt effectively and recover