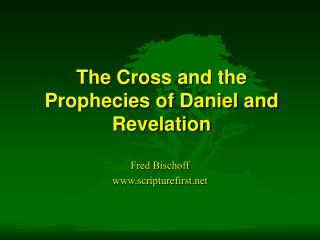 The Cross and the Prophecies of Daniel and Revelation

The Cross and the Prophecies of Daniel and Revelation. Fred Bischoff www.scripturefirst.net. Introduction. Before we go to the book of Daniel, I want to build a background for our study.

The Cross and the Prophecies of Daniel and Revelation

revelation = apokaluyiV (“an unveiling”) - . portraits of christ in revelation. today: the lord of glory (rev. 1).

Revelation of Jesus– Things are Not as They Seem – Look! A Throne! - . scripture reading revelation 4 this series

GOD’S PROPHETS AND PROPHECIES - . jonah and nahum – prophets to nineveh. understanding of assyria and nineveh.

Paradoxes of the Cross - . “for the preaching of the cross is to them that perish foolishness; but unto us which are

STUDY OF THE BOOK OF REVELATION – PART 13 - . part 13 – the challenges of the church: the need for encouragement and

STUDY OF THE BOOK OF REVELATION – CHAPTER 19 - . part 15 – the challenges of the church: the need for encouragement

Revelation 1:1-2 The revelation of Jesus Christ, - Which god gave him to show his servants what must soon take place. he

STUDY OF THE BOOK OF REVELATION - . part 11 – the challenges of the church: the need for encouragement and exhortation.

The book of Daniel - . an account of god’s sovereignty. author daniel (“god is my judge”). he was deported from

The Prophecies of Ezekiel - . the light class with contributions from debbie blank. the prophecies of ezekiel parallel