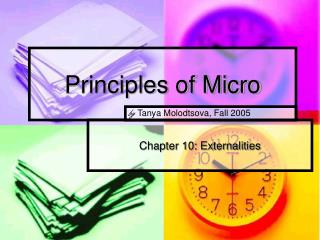 Principles of Micro by Tanya Molodtsova, Fall 2005 Chapter 10: Externalities We Will Learn: what an externality is why externalities can make market outcomes inefficient. how people can sometimes solve the problem of externalities on their own. ECON 201 PRINCIPLES OF MICROECONOMICS - . chapter 1. professor carol cui. economics a discipline that studies how to

Principles of Microeconomics - . definition. economics is the study of how people and societies use their scares

INTRODUCTION - . review of key topics from micro principles. topics of discussion. microeconomics: the allocation of

ACE: The Micro Ds in the Macro ADDIE Instructional Design Model - To ace your visual design, you:. principles : selection

Microeconomics - . what is economics?. it is the choices that people and society have to make. e.g. buying a cd or buying

Leibniz’s Principles - . it just happened. v s. it happened for a reason.

MICROECONOMICS ECS201 - . welcome. what are we doing today?. who am i? what to do and not to do means of communication