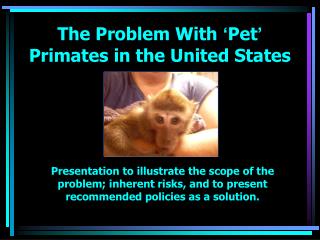 The Problem With ‘ Pet ’ Primates in the United States

The Problem With ‘ Pet ’ Primates in the United States Presentation to illustrate the scope of the problem; inherent risks, and to present recommended policies as a solution. Summary Of U.S. State Laws Regarding Private Sector Possession Of Nonhuman Primates 17 states have no restrictions

The Problem With ‘ Pet ’ Primates in the United States

Highway Construction Zones Pose Unique Risks for Workers - Working in a hie., construction zone can be an extremely

What was - . the biggest. problem. of our. fps. ?. at that time. no strategic. goals. no processes. huge risks. no time

Work Breakdown Structure Workshop - . wbs workshop objectives. to reinforce the value of and approach towards work

What is Project Scope Management? - . scope refers to all the work involved in creating the products of the project and

RADIATION ACCIDENTS: TERMINOLOGY, SCOPE OF PROBLEM AND STATISTICS - . module i. module i - radiation accidents. what is