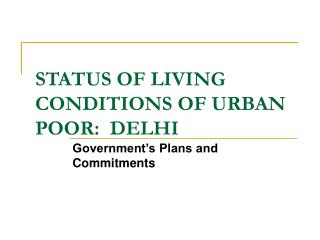 STATUS OF LIVING CONDITIONS OF URBAN POOR: DELHI Government’s Plans and Commitments The MCD standing committee has taken note of the miserable condition of public toilets and decided that no private player will be involved in their upkeep.

Uttarakhand - Annexure – vi. uttarakhand. pahal – what it is?. an initiative of ssa, uttarakhand for providing school

Agriculture and the Environment - . agr 203. agriculture. in many countries, agriculture is the most important industry.

The Factory System and Living &amp; Working Conditions - . chapter 13 section 2 and 3. i.) machines change the

Improvement of health and living conditions - . by 1850, factory owners and gov’t realized that the workers would