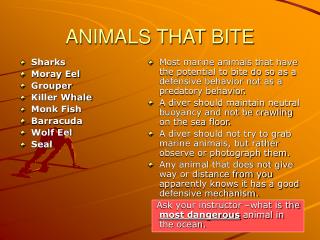 Sharks Moray Eel Grouper Killer Whale Monk Fish Barracuda Wolf Eel Seal Most marine animals that have the potential to bite do so as a defensive behavior not as a predatory behavior. A diver should maintain neutral buoyancy and not be crawling on the sea floor.

Bites and Stings - . identify the signals of the most common types of bites and stings. describe how to care for insect

Rabies: What We need to know! - . developed for public information by tibet charity animal care

First Aid - . chapter 14 bites and stings. animal bites. 1 in every 2 americans will be bitten at some point buy an

Chapter 12 - . bites and stings. animal and human bites. determine if victim was exposed to rabies. spread through saliva

Rabies - . the rabied killer by: nicholas mallard. what are rabies

Rabies - . by: mahdi mahdi. it came from dogs, cats, other animals that bite. the disease is zoonotic , meaning it can