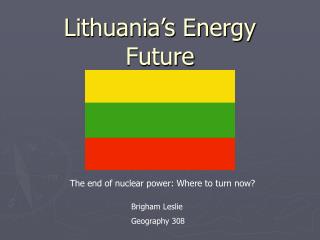 Lithuania’s Energy Future The end of nuclear power: Where to turn now? Brigham Leslie Geography 308 Lithuanian Energy Extremely important to the country 14% of all industrial employees 25% of the of the total assets of the country’s enterprises

LITHUANIA - . the republic of lithuania is the country in central europe, by the baltic sea . lithuania b order s with

LITHUANIA: who we ARE who we WILL BE who we COULD BE TOGETHER - From “northern jerusalem” to start–up nation no.2

IMPLEMENTATION OF THE AGRI-ENVIRONMENTAL PROGRAMMES IN LITHUANIA - : how to engage farmer? gediminas almantas ministry of

MY SWEET HOME Lithuania Comenius project Europe on stage ! - . lithuania. it is the country in europre, near the baltic