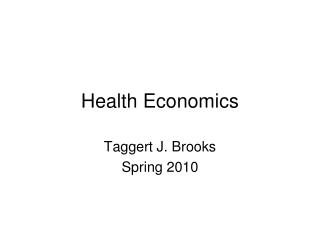 Health Economics. Taggert J. Brooks Spring 2010. “The curious task of economics is to demonstrate to men how little they really know about what they imagine they can design.” ~F. A. Hayek The Fatal Conceit. Why study health economics?. The basic economic questions which every society faces.