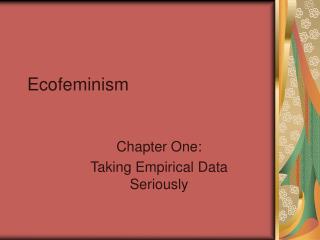 Ecofeminism Chapter One: Taking Empirical Data Seriously Ecofeminist Philosophical Perspective Trees, forests, and desertification, water and drought, food production, poverty and toxic waste and environmental issues, what is it to do with women?

Ecofeminism - . chapter two: ecofeminism through an anti-colonial framework. ecofeminism challenges all forms of

ecofeminism - Is to have to go without what is. needed to be

Ecologism - . anthropocentrism- human centred political ideologies which are questioned by ecologists as nature is

Ecology Part 1 - . standard 6 stability in an ecosystem is a balance between competing effects. vocabulary. create a