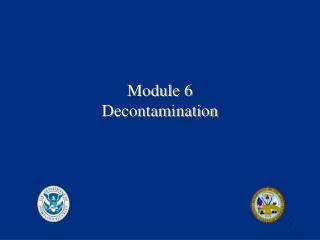 Module 4: Standardized Decontamination Procedures - . terminal objective. at the end of this module the student will be

Module 6 Project - . put your name here. change the name of the project to your environmental issue!!! change the design

Decontamination - . manufacturer and supplier of innovative products in the field of infection control training &amp;

Decontamination - . instructional goal understand the purpose and principles of decon see the potential for work-related

DECONTAMINATION - . decontamination is the process of removing potentially harmful contaminants from exposed individuals

Module 6 Processing the specimens and inoculation on solid and liquid media - . learning objectives. at the end of this

Module 6 Decontamination - . decontamination. reduction or removal of agents by physical means or by chemical

DECON TEAM REQUIREMENTS/ SITE CONSIDERATIONS - . objectives. who should be on the decon team? discuss osha first