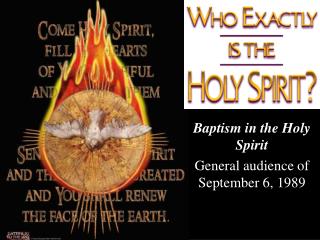 Baptism in the Holy Spirit General audience of September 6, 1989

Baptism in the Holy Spirit General audience of September 6, 1989. When the Church, originating in the sacrifice of the cross, began her early journey by means of the descent of the Holy Spirit in the upper room at Pentecost, "her time" began. . "It was the time of the Church"

Baptism in the Holy Spirit General audience of September 6, 1989

BAPTISM - . the significance of believer’s baptism in an ecumenical age. from pastor jim alter’s book “why

The Holy Spirit &amp; the Church - . who is the holy spirit?. third person of the trinity generated by the love of

Pentecost Was Originally a Celebration of the First Fruits of the Harvest General audience of July 5, 1989 - . it is

Peter’s Sermon on Pentecost - . acts 2. and he said to them, “go into all the world and preach the gospel to every

The Helper - . a study of the holy spirit by catherine marshall. part -4: chapters 1-7 how the helper ministers to me at

Audience Etiquette - . a doctoral defense is a formal presentation. if you are in the general audience (not formally